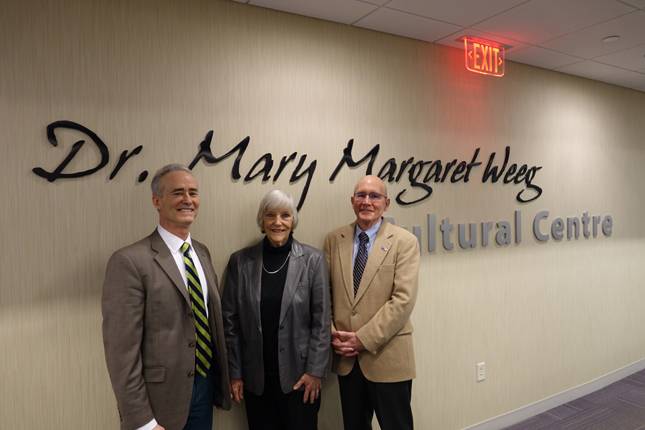 The largest gift in Illinois Valley Community College’s 95-year history grew this week to $1.2 million as the college received an additional contribution from the estate of Dr. Mary Margaret Weeg.

Dr. Rose Marie Lynch, executor of the Weeg estate, presented IVCC President Jerry Corcoran with a check for $105,560, the remainder of the estate, to bring the final gift to more than $1.2 million.

Weeg, a longtime English instructor and humanities division chair, died April 19, 2015 at age 84. Following the first gift of $1.1 million in August 2017, the IVCC board

“This monumental and unprecedented gift from a beloved professor and academic leader has had a profound impact on our institution and will continue to do so for generations,” said Corcoran.

Lynch, who was hired by Weeg in 1970 to teach English and journalism at IVCC, said, “This bequest is a tangible legacy, but Mary Margaret’s true legacy is in the thousands of students, teachers and friends she inspired with her love of language, literature, music, art and travel.”

Corcoran added, “How fitting it is that Mary would entrust Rosie, her protégé, to carry on her legacy this way. The bond of trust that existed between them was extraordinary and the college is the beneficiary of their compassion.”

In 1964, she was appointed chairman of LP’s English department and in 1967, when the IVCC district opened, was named chair of the college’s humanities division. She resigned that chair in 1980 to return to teaching full time.